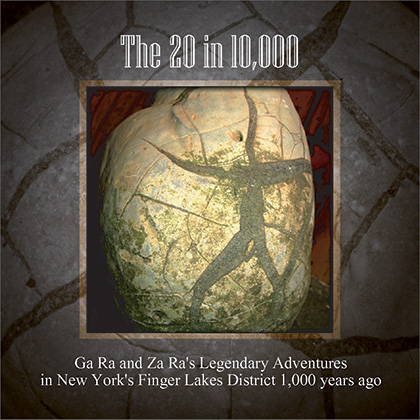 Indigenous people in the Americas had no written languages and their legends today are stories that were condensed over time from explanations by fathers to sons and mothers to daughters. These legends are all that is left about ancient historic events and the mysteries of life once known by the Ancient Ones.

Hear Ga Ra and Za Ra discuss their 9th incarnation together, a thousand years ago, in their lifetimes as Amaru and White Buffalo Calf Woman. Listen to their explanations about the wisdom and love stories contained in ancient “Mound Builders” and Seneca legends like “The Woman Who Fell From The Sky” and “The Great Sky Trail of Gahana and Gauwii”.

Listen to how in their 9th incarnation Ga Ra and Za Ra explained such concepts as the multiple dimensional levels in our universe and the Speed of Light to the ancient Mound Builders and how their explanations became the Seneca legends about New York’s Finger Lakes District.

Learn why indigenous peoples referred to America as “Turtle Island”. Hear the fascinating truth contained in Mound Builders legends about the “Turtle Rocks” that are found nowhere else in the world except in New York’s Finger Lakes District and how Turtle Rocks are part of the 10,000 year long Love Story that was loosely portrayed in Hollywood’s movie “Cocoon”.

Hear how Joseph Smith, (founder of Mormonism), used Teraphim, called “seer stones”, to read ancient Egyptian writings he called the “Golden Plates of Moroni,” (upon which the Book of Mormon is loosely based). Listen to how the writings of Moroni, (and also the Hopi writings of Tiponi), are from the biblical “Ark of the Covenant” and how America’s portion of the Ark is still located in the Honeoye, NY area of the Finger Lakes District.

Learn the truth about the “Divine Mother” and “Sky Woman” legends. Listen to the history of “Burning Creek” and how Amaru and White Buffalo Calf Woman’s songs of Unconditional Love healed large numbers of people, there a thousand years ago.

Hear the secret knowledge about “Power Prayers” to the “Great Spirit” that shamans used to bring rain to crops in time of drought and sunshine for the times of community festivities. Learn how 1,000 years ago, White Buffalo Calf Woman paved the way for women’s rights in America.

We do What we Say, We Walk our Talk
* $5 from each CD/Download sold is donated to an African charity that feeds and educates a thousand destitute children living in corrugated tin shacks in slum areas that have no running water.